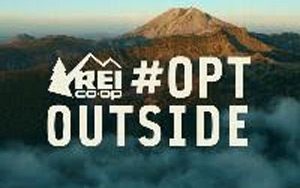 Outdoor retailer REI says it is shuttering the shop this Black Friday, the biggest shopping day of the year, and urging its customers to #OptOutside. It’s even extending the holiday to e-commerce, and says it intends to feature a black takeover screen on its site, encouraging customers to get outdoors with friends and family. Experts say that it’s just the latest example of Americans growing increasingly blasé about retailers’ relentless hype leading up to Thanksgiving weekend.

REI, which is the nation’s largest co-op, says it sent a letter to its 5.5 million members, explaining that it intends to pay all 12,000 of its employees to skip the mall and head to the mountains instead, using a social media campaign to encourage them to share their outdoor adventures. (A dedicated Web site offers recommended hikes.)

The letter from the Seattle-based company, which has $2.2 billion in annual revenues, quotes outdoor visionary John Muir, circa 1901: “Thousands of tired, nerve-shaken, over-civilized people are beginning to find out that going to the mountains is going home.”
That is bound to strike a chord with consumers who have become increasingly doubtful about all those Midnight Madness and overblown doorbuster events, and REI’s move is a whole new point of differentiation.

"Reports of shopper exasperation with retailers interfering with family time on Thanksgiving prompted certain retailers, like The Home Depot, to shut their doors on Thanksgiving in 2014,” says Traci Gregorski, VP-marketing at Market Track, a market intelligence provider. “REI’s brand is likely to gain favorable shopper perception with this move, benefitting them in the long term.”

Other retailers, including GameStop and Lowe’s, also close on Thanksgiving, to reflect that same family-friendly sentiment.

But a bigger issue, industry observers say, is that consumers become increasingly facile as they find the best bargains and it’s much harder for them to believe that anything stores offer on Black Friday can be that much more amazing than what they’d find for themselves. A new survey just released by Deloitte says that 52% of the 4,000 consumers it included say they rely less on Black Friday; 41% say the same for Cyber Monday.

And Brand Keys’ new holiday report says that 84% of people begin shopping before the big Black Friday events. “The trend for holiday shopping starting earlier and earlier was something we commented upon in 2010, and is conclusively proving itself out,” writes Robert Passikoff, founder and president of the New York City-based brand loyalty consultancy.

“Part of the trend is rational; consumers have realized that low-lower-lowest prices are always to be found. Other parts of the trend are driven by emotional values: gratification in finding the perfect gift, no matter what time of year it is, and a reduction in the stress of having to deal with all other elements of the year-end holidays.”