At OMMA: Here's How Technology And Creative Can Live Together 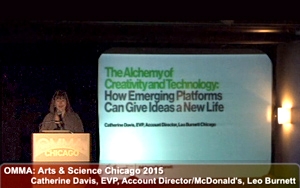 Technology needn’t hamper creativity. Instead, it should foster it.

Catherine Davis, executive vice president and account director for McDonald’s at Leo Burnett, demonstrated several examples of technology enabling creativity at “OMMA Chicago: Art & Science of Digital Advertising.” From a semi truck equipped with cameras in front and screens on back (to give passing drivers a view of potential traffic ahead) to an Allstate social media stunt in which a couple’s possessions were stolen and sold in real time while they were at the Sugar Bowl (to demonstrate how burglars use social media to stalk empty homes), Davis said using technology can make creative storytelling more powerful.

“We all feel the power of technology in our personal lives,” Davis said. “Technology has completely changed our relationships with brands, and most importantly with us as marketers, it changes what people expect from brands.”

While preparing for the presentation, Davis said she was surprised by how few great examples of technology-fueled creativity there were to share with the audience. “There’s a huge amount of untapped potential here,” she said. “It can enhance storytelling or make it virtually impossible to ignore a message.”

For instance, many marketers are focused on creating apps for people’s smartphones while ignoring many of the other features that can make for an impactful experience (especially considering most smartphone users spend 75% of their time using only three apps), she said. “ Our phones are incredible devices,” she said. “[They are] a camera, GPS, and have myriad features. Why not use these features to enhance your story? Almost no one does.”

One promotion for Showtime demonstrated how a phone’s inherent features could be used effectively. In it, a video advertising the network’s “Homeland” show, caused the phone to vibrate when an explosion appeared on screen.

Marketers can also use a technology’s limitations to their creative advantage, Davis said. The World Wildlife Fund, for example, used Snapchat’s impermanence to make an impactful impression about endangered species. “This is the perfect example of combining a new media platform with creativity,” Davis said. “There’s a huge amount to potential out there, and this demonstrates that.”

To make technology-fueled creative effective, Davis had tips such as having a clear objectives fueled by compelling consumer insights, foster ongoing creativity by making it a part of the overall organization, visiting with start-ups and innovators to see what’s new and effective, and, finally, collaborate with both creative and media agencies. “I cannot tell you how important it is to collaborate across those lines,” Davis said. “Media agencies and publishers are the first ones to know technology. They see everything first.”