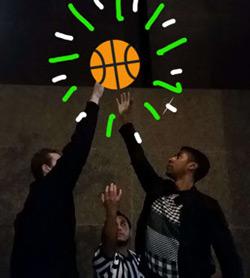 On Oct. 27, the brand executed its first Snapchat Story spanning multiple cities — the three that had opening-night games: Oakland, Atlanta and Chicago.

Mountain Dew, known for pioneering use of new digital formats to engage with its core audience of young males, also made a splash with its Snapchat Story during this year's Super Bowl, and has produced several active-sports virtual reality films. Last month, it became one of the first brands to use Snapchat's Lenses.

In addition to the Snapchat Story, the brand debuted a TV spot for Mtn Dew Kickstart, featuring Oklahoma City Thunder star Russell Westbrook, during TNT's coverage of the Tip-Off Night games. In the spot, Westbrook assumes an ultra-confident stance — dubbed the "Powerstance" by Mtn Dew — as he appears to slide through scenarios that include a club and a pickup basketball game.

A different, two-minute version being used for pre-roll is notable not only because it has Westbrook showing up in much wilder scenarios — including the African veldt and a moon landing — but because, as Ad Age first reported, it includes no branding or product shots. At the end, Westbrook suggests that viewers "go watch my ad" (the one described above). The idea is to test whether, given compelling enough content, viewers will choose not to skip the rest of the ad after the first five seconds, and will then actually elect to watch a more conventionally branded ad.