Clorox Gets Viral With Flu-Tracking Campaign 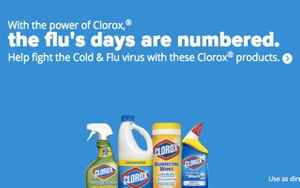 This is one of those times you will probably want to get a needle in the arm. It’s flu season. If you get inoculated you are doing yourself and everyone else a favor. No, it doesn’t turn you into an alien, doesn’t contain thought-control nano-robots, and won’t make you autistic.

So Clorox, whose business model and brand equity is around sanitation products, is getting the word out, while promoting the brand, with a new digital program, Clorox Cold & Flu Pulse, that lets consumers get a real-time influenza weather report.

The digital and social platform centers on a consumer-facing app that reports on where flu is likely to happen, and how virulent it is likely to be, via a program that analyzes millions of Twitter conversations in real time.

The effort, at FluPulse.com, offers icon-based reports on things like who’s tweeting symptoms, how many mentions of the flu are happening, the top cities where it is trending. The value isn’t just buzz: it turns out that viral buzz precedes the appearances of the actual virus.

The program was developed by Critical Mass, and inspired in part by the work of Jonah Berger, marketing professor at the University of Pennsylvania’s Wharton School, whose oeuvre includes a book titled, coincidentally, Contagious: Why Things Catch On.) The platform uses Bottlenose Stream Intelligence to find terms and hashtags around flu and colds on sites like Twitter, and delivers quick bites on what's happening where, and how "hot" the microbial environment is at any given time. Consumers are encouraged to go viral, so to speak, at #stopthespread.

Berger tells Marketing Daily that the tool is a first for flu tracking because it uses social buzz to drive predictive mapping, rather than watching actual outbreaks. “People have these conversations, and if we can mine those mentions, we can get a good sense of what's going to happen.” Berger says online conversation about the flu in a given city or region tends to spike a week or so before a breakout, so “We get a good sense of how big an outbreak will be and where.” From the consumer side, the application can tell people when it is time to put up the biotic storm shutters. “The key is [gathering] leading, not lagging, indicators,” he says.

A Clorox representative tells Marketing Daily the effort is tied to a national campaign touting products like Clorox Disinfecting Wipes, which kill human coronavirus and influenza. Clorox has been promoting inoculation for 10 years through partnerships with groups like the Visiting Nurse Service of New York and Partners in Care.

Says pediatrician Tanya Altmann, who is also involved in promoting the program, “This lets us know when we need to talk to families, districts and news outlets, because we can know a week before the flu hits. And when we know that we can ask people to get vaccinated, wash their hands regularly, wipe off surfaces in classrooms and practice good personal hygiene.”