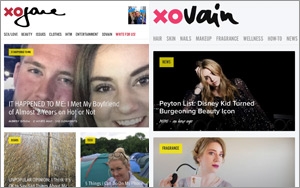 Pratt, who was the founding editor of Sassy and the eponymous magazine Jane, founded xoJane in 2011 to provide inclusive, non-“snarky” but reliably au courant lifestyle, politics and entertainment content to women ages 18-34.

xoVain was launched in 2013 to cover beauty and fashion from a realistic, non-judgmental perspective. After the acquisition is complete, Pratt will continue serving as editor-in-chief, and her team will relocate to Time Inc.’s new headquarters.

According to comScore, xoJane.com attracted 2.5 million unique visitors in September, while xoVain.com had just under 1 million.

Say Media originally put the sites up for sale in November 2014 as part of a strategic realignment away from publishing and toward becoming an advertising technology platform. Rumors of an acquisition circulated in May of this year but without result.

This is just the latest in a flurry of deals by media companies on the prowl for digital publishers that can help them expand their reach with millennial audiences.

Earlier this month, Condé Nast acquired up music review and criticism site Pitchfork Media, which also has an established events business, including annual Pitchfork Music Festivals in Chicago and Paris.

In August, NBCU invested $200 million in BuzzFeed and $200 million in Vox Media, valuing BuzzFeed at $1.5 billion and Vox at around $850 million. In April, Refinery29 raised $50 million from Scripps Interactive Network and WPP to fund its international expansion, in a round of investment that valued the publisher at $290 million.