The programmatic media-buying marketplace appears to be tightening up, with demand catching up with supply. While the volume traded in the marketplace continues to expand at a breathless rate, the average price of inventory is beginning to rise due to a shift toward so-called “premium” inventory.

“There’s a flight to quality going on right now,” explains Art Muldoon, CEO of independent trading desk Accordant Media, which is releasing the third-quarter edition of its quarterly programmatic marketplace tracking report today. The report shows that while total volume expanded 53% in the North American marketplace vs. the same quarter a year ago, the average CPM -- or cost-per-thousand -- paid for those programmatic audience impressions rose 6%.

While Accordant doesn’t have visibility into what other traders are doing in the marketplace, he said that based on his company’s own trades, the rising value of programmatic audience impressions reflects a shift in composition of programmatic buys toward inventory that is higher-priced, and therefore deemed a proxy for quality.

Among other things, he said there has been a pronounced shift from open RTB trades to private marketplace deals, but he said the mix of inventory being traded has also begun to move away from conventional display banner ad impressions to video, native and other formats that are perceived as being scarcer in supply and more premium in value.

He speculated that another big factor driving value up is that the industry has done a better job of gatekeeping low-value inventory such as “non-human traffic” and fraudulent traffic generated by bots, and non-viewable impressions that consumers may not see. He also said advertisers, agencies and publishers are doing a better job of using audience data to identify the most valuable audience impressions, which is also driving prices upward.

Muldoon said it is hard to discern how much the overall marketplace has shifted from open RTB to private trading, but he estimated that private marketplaces now account for as much as 25% of Accordant’s overall trading volume. Importantly, he said the private deals have given more premium publishers the confidence to participate in programmatic trading and/or to put more of their most premium inventory into programmatic markets.

Interestingly, the shift toward more premium inventory isn’t necessarily driving better performance. According to Accordant’s data, average click-through rates for programmatic media buys have declined 4% over the same period. Muldoon recommended “not reading too much into” the declining click-through rates, because there are many other more representative measures of performance, but they just are not standardized in a way that can be tracked and reported as part of the report. 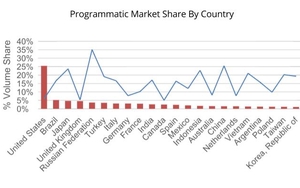 While Accordant did not report price or performance trends for markets outside the U.S., its data shows that the volume of programmatic trading is exploding overseas. Part of that is due to the fact that the U.S. marketplace is more developed and is expanding at a slower rate vs. other countries, but the bottom line is that the programmatic marketplace is becoming more geographically dispersed.

In a telling development, Brazil emerged as the largest programmatic market outside the U.S. during the third quarter, supplanting the U.K., which was a relative early adopter of programmatic trading. The U.K. fell to fourth place, behind Japan.