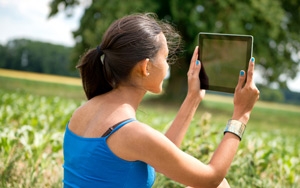 Consumers are buying more cellular-enabled tablets than ever before, which is good news because they are more satisfied with them, and that satisfaction provide a halo effect for other products.

According to J.D. Power’s latest Tablet Satisfaction Study, consumers who have purchased mobile data-connected tablets are more satisfied than consumers who own only WiFi-enabled tablets. The gap is also growing; the current 26-point satisfaction gap (833 vs. 807 on a 1,000-point scale) is up four points from a year ago.

According to the study, 31% of tablet purchasers bought one with a mobile data plan, which is higher than in any previous study (and even 3% higher than a similar study released six months ago). That increase — plus the findings that 17% of consumers with data plans watch a full-length movie daily on their tablets vs. 4% who have WiFi only — is a clear indicator that consumers are valuing constant connectivity, Parsons says.

In overall rankings, Samsung had the highest overall satisfaction score (827), followed by Amazon and Apple, which both had scores of 825.

“The convenience of being continuously connected is a key driver of satisfaction among tablet owners with data plans,” said Kirk Parsons, senior director and technology, media & telecom practice leader at J.D. Power, in a statement. “When customers are satisfied, they are more likely to recommend their tablet brand to their friends and family.”