Will ESPN Opt For An OTT Platform? 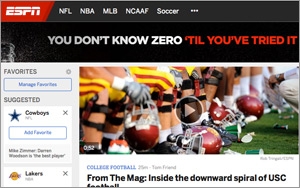 Could ESPN offer an over-the-top (OTT) Internet option and have a strong business? One media analyst says this would result in fewer subscribers -- and a lot of tough competition from other cable networks.

Todd Juenger, senior media analyst at Bernstein Research, writes “the universe of younger adults, cord-nevers, with an interest in sports, who if given the opportunity, might be willing to fork over $20/month to see ‘SportsCenter,’ college sports, and the national games each week. That's the target market. We doubt it's very big.”

With all the attention focused on cord-cutters and crumbling pay TV providers having to pay high carriage fees, Walt Disney -- parent company of ESPN -- believes ESPN could have a good alternative to the current TV system by offering an OTT option.

The thinking now, Juenger says, is that some 100 million U.S. pay TV homes currently pay around $7 a month for ESPN -- but that around 33 million homes who are sports fans would pay $20 a month for an ESPN OTT service.

But Juenger believes any TV consumer would want more for their $20 a month. This is where the non-sports cable network competitors come in.

He says if ESPN launched OTT, then all the other cable network groups would jump in, and in a big way -- Discovery Communications, Viacom, AMC Networks, Scripps Networks Interactive, and Turner Broadcasting, to name a few.

“We believe the four companies listed above could team up and offer a mini-bundle, retailing at $15, with close to 50% gross margin... [which] would have scripted drama, comedy, non-fiction, lifestyle, news, kids, (and even some sports). Pretty much something for everyone in a non-sports household.”

Bob Iger, CEO for Walt Disney Co, says 83% of pay TV homes tune into ESPN over a broad time period. But Juenger says “many of those 83% of households are casually tuning into ESPN for short stints as they flip around the dial.”

He adds that spending an extra $20 a month on ESPN wouldn’t work because TV network consumers would figure out their overall TV network value.

“Plenty of non-sports households would probably keep the bundle [a traditional pay TV service] because it still offers by far the best value for the majority of U.S. households who continue to consume almost 8 hours of TV per day.”