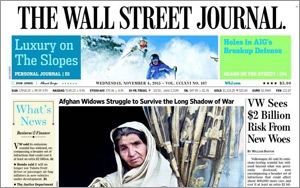 Another big publisher is testing the waters of virtual reality with The Wall Street Journal’s launch of its new, in-app immersive video and VR programming, which will allow viewers to experience video environments without the need for another app or extra equipment.

The immersive video and VR technology, created in collaboration with video tech firm Vrideo and compatible with both WSJ’s iOS and Android apps, enables viewers to engage with interactive programming using only a smartphone. That can be turned into a basic VR device with low-cost headsets, like Google Cardboard.

Desktop users can explore the worlds via their browser, or engage in the VR experience using an Oculus headset.

Following an earlier, experimental foray into immersive programming with a three-dimensional, interactive feature about the history of NASDAQ released in April, the WSJ debuted its first official VR content this week with a profile of Sarah Lane, a soloist at American Ballet Theater; the newspaper plans to unveil more explanatory journalism content using VR in the weeks to come.

WSJ editor-in-chief Gerard Baker added that the WSJ will be making its immersive video and VR technology available as an open source platform in the near future, opening the way for collaborations with other media organizations.

The debut of WSJ’s VR offering comes close on the heels of a similar feature from The New York Times, which recently unveiled plans for NYT VR, a new virtual reality app created in collaboration with Google and VR studio IM360. Due to launch this month, the app will deliver immersive editorial, as well as advertising experiences, to viewers with smartphones, compatible with both iOS and Android devices, and launched with several major ad sponsors already on board, including GE and Mini.

To help readers experience the new VR media offerings, the NYT is distributing over 1 million Google Cardboard viewers to home subscribers on the weekend of Nov. 7. It is also making the viewer available for free to Times Insider subscribers with promotional codes delivered via email.