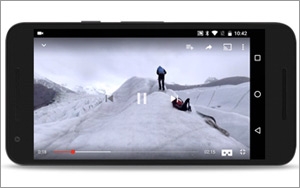 The move gives YouTube on Android a VR edge, and the experience through Google Cardboard supports 360-degree videos. Those who own Google Cardboard can also view nearly all videos through what the company calls a virtual movie theater-like experience.

The TOMS video allows viewers to take a virtual journey to Peru to see the work its Giving Partners do and to spend time with some of the children who receive the shoes.

Google says viewers can watch any video using Google Cardboard, and experience what it calls "a kind of" virtual movie theater by selecting the "Cardboard" option from the watch page menu. Drop your phone into your viewer.

The feature aims to pump up YouTube's latest subscription service, YouTube Red, which launched last week. It's a membership program for videos and music that gives content creators a way to earn money from their videos. YouTube Red provides a secondary revenue stream for creators in addition to what they already earn through ads.

The revenue from YouTube Red membership fees is distributed to video creators based on how much members watch the content. As with YouTube's advertising business, the majority of the revenue goes to creators, per Google.

Google says long term creators will see data split by YouTube Red members and non-members, similar to what they see in YouTube Analytics for metrics such as subscribed and not subscribed viewers.