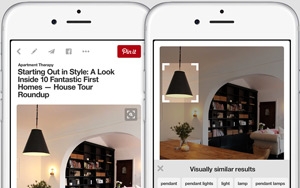 Pinterest wants to act more like Google and become a "discovery engine." On Monday it began offering a feature that lets users search on its site without using text. The tool enables Pinterest users who see a shirt in an image to highlight it to search for ones with similar styles or colors in other pictures or pins.

High-quantity images increase click-through rates and engagement. Search marketers have been trying to understand how the algorithms behind Pinterest will allow them to take advantage of visual search, a topic of discussion at the MediaPost Search Insider Summit in December.

Pinterest's offering becomes available to all of the more than 100 million monthly active users globally across iOS, Android, and the Web.

When it comes to search and discovery, much is at stake for Pinterest. eMarketer estimates the U.S. search advertising market will reach $26.53 billion in 2015, rising to $29.24 billion in 2016.

A recent effort by Pinterest in deep learning where software learns to identify patterns by sifting through large amounts of data continues to strengthen Pinterest's stance in visual search. In 2014, the site rolled out Promoted Pins and Guided Search, which suggests other category topics based on the initial search query.

At Microsoft, Malhotra focused on Bing and search engine advertising. He lead a team of program managers for Whole Page Ranking, and Metrics & Ad optimization at Bing, focused on universal and blended search strategies, and supported initiatives leading up to the "Bing it on" campaign.

As for Pinterest, the visual-search feature will allow users to closely define intent and interests for specific products brands can earlier identify.