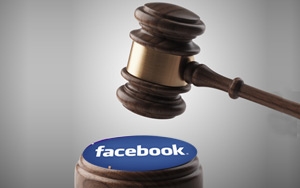 A Florida resident has sued Facebook for allegedly violating a federal robo-texting law by "bombarding" her with unwanted text messages.

Deborah Roche alleges in a federal lawsuit filed this week in the Northern District of California that Facebook sent her numerous SMS messages inviting her to sign up for the service. "Defendant bombarded Plaintiff’s Number with these unwanted and annoying texts at various times throughout any given day, sometimes as early as 3:20 am," the lawsuit alleges.

The texts allegedly consisted of statements like: "There are 9 people you may know on Facebook," and "Over 150 million people have used the Facebook friend finder. Find the people you care about."

Roche isn't the only one suing Facebook for allegedly running afoul of the robo-calling law. In March, the company was hit with a potential class-action lawsuit by Noah Duguid, who alleged that Facebook repeatedly sent him unwanted text messages -- although he doesn't have an account on the service.

Duguid, who says he has never signed up for Facebook, or even provided the company with his phone number, alleges that the company repeatedly sent him notifications stating that someone had logged into his account.

Facebook has filed papers asking for Duguid's potential class-action lawsuit to be dismissed. Among other arguments, the company says that its messages regarding log-ins are protected by free speech principles. The Obama administration said recently that it may weigh in on that question. The administration has until Dec. 11 to decide whether to intervene in the case.