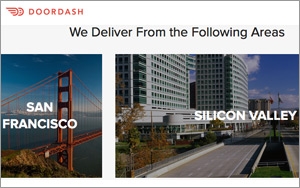 The West Coast burger chain In-N-Out is taking aim against DoorDash, a California-based startup that delivers takeout from restaurants and fast-food establishments in cities like San Francisco and New York.

In-N-Out alleges in a complaint filed on Friday that its trademark was infringed when its name and logo were used by DoorDash in ads and promotions for its delivery service. DoorDash accepts orders via an online platform and then sends employees to restaurants to pick up and deliver the meals. The company's Web site lists a variety of establishments from which it will pick up takeout orders, and also provides menus and a price list. Prices reflect DoorDash's service, which reflects a markup from the restaurants' prices.

The fast-food chain argues that the presence of its name and logo in DoorDash's materials implies that the "quality and services" offered by DoorDash are comparable to what people would find if they made purchases directly from the chain.

But In-N-Out says that the quality of food delivered by DoorDash "does not at all comport with the standards that consumers expect" from In-N-Out. The chain adds that it has no control over how long it takes to deliver the food, or the temperature of the food while it's in transit.

"While Plaintiff adheres to the Food Code, on information and belief, Defendant does not adhere to such regulations, including with regard to compliance with required food safety and handling practices," the company alleges in its complaint, filed in U.S. District Court for the Central District of California.

Santa Clara University's Eric Goldman, an expert in online trademark law, says the outcome of the lawsuit could turn on how well DoorDash informs its customers about potential pitfalls with the delivery process.

He adds that he believes In-N-Out is "overreaching," considering that "most people ordering food for delivery know that the food won't taste as good delivered than it would in the restaurant."

But he says the company's stance isn't frivolous, given its allegations about food quality and potential health hazards.

"If (customers) think they are getting the same quality as if they went to the restaurant themselves, then In-N-Out has a point," he says in an email to MediaPost. "If the customers are getting exactly what they bargained for, I don't understand why In-N-Out cares--or why the law should."