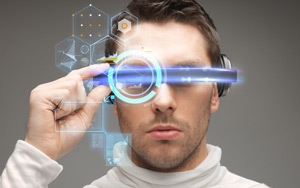 Google, Microsoft and Facebook have begun testing ways that virtual reality and augmented reality can improve how brands connect with consumers, including interfaces like voice search and retinal scanning. While still early in their development, the applications could lead to a new form of media for advertisers and agencies to leverage.

This week, Google told the world it would expand its Expeditions Pioneer Program to 15 new cities worldwide, with help from Subaru and Mattel. The program allows teachers to take students on virtual trips without leaving the classroom.

A May 2015 report from Piper Jaffray predicts the VR market for content will reach $5.4 billion by 2025, as organizations like the National Basketball Association and Turner Sports provide fans with access to view live professional games and events in virtual reality. The live stream took place on opening night in October 2015.

On Wednesday, Comcast and Time Warner reported their investment in virtual reality. The companies’ venture arms joined a $30.5 million funding round for NextVR, which broadcasts events live in virtual reality. Last month, NextVR offered virtual-reality broadcasts of a Democratic presidential debate and the NBA.

Adding voice or eye retina technology to the experience, where the software responds to verbal commands or eye movement, changes how search marketers need to think about the future of advertising and marketing.

Tait says Marriott International teleported people from London to Maui through virtual reality with help from Oculus as they left the city hall where they got married, but developers have yet to integrate search capabilities that will give the person control of the experience. "I can see retina technology built into VR allowing people to pull in places from other locations with a glance or voice command," Tait says. "The search would provide hotel options, places to go, and things to see."

Publishers have begun to experience AR. Last Sunday more than 1 million print subscribers to The New York Times received a complimentary virtual reality headset, Google Cardboard, with their paper. Users were instructed to insert an Android or iOS smartphone with the New York Times VR app installed into the headset to get it working.

They used the headset to watch a selection of immersive VR videos filmed by Times journalists, including "The Displaced," which focused on the stories of migrant children. This is the future of journalism -- a visual, virtual representation of a two-dimensional text-based story that immerses the reader into another world.

For retina search, the brand would add specific trigger points in the visual movie that if detected through a longer glance would serve up the information. Tait can see brands also working with Microsoft HoloLens, which creates holographic images. "It's not all hooked up, but I could see it progressing as more brands create content," she says, pointing to YouTube as being one of the first platforms to explore these options. "We're hoping to have HoloLens when Microsoft releases the development platform in Q1."

It's coming, says Jeremy Hull VP products and services, solutions at iProspect. Mobile moved search from a discrete activity into an integrated task. Searches occur without closing out the app. "The change will occur in the same way for virtual and augmented reality," Hull says. "The company powering that experience will provide the search results."

Similar to other media, data becomes critical to the success of this emerging technology. "Since it's an open field for those that can innovate and provide a workable solution, it's not about being compatible with Google's Merchant Center or providing a fee to Microsoft," Hull says. "Voice, visual and retinal scanning will become a way to communicate. To guarantee great results, search providers will need good data to tap."

The data requirements will force industry standards for clean and concise data, so technology companies can drive the connection.