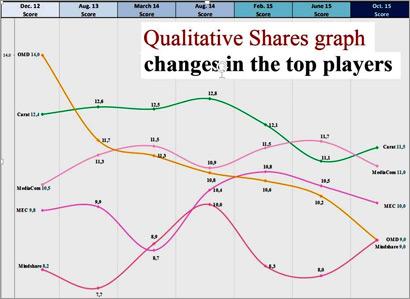 The report analyzes global networks (no independent agencies) in over 40 countries with different weighting, depending on the size of the markets.

The assessment uses up to 19 criteria including new business, assignment retention, awards, talent and resources.

The latest report is based on research through October 31, which included the Johnson & Johnson global consolidation with J3, part of IPG Mediabrand’s UM. New business wins account for 25% of an agency’s total score.

For Carat, its top ranking is the fifth time in the last six reports that it has secured the top spot. Doug Ray, Global President, Carat said the agency was “thrilled” to have placed first once again. “This is the most global and most exhaustive report out there,” he said.

The accompanying graph shows the evolution of the top-five agencies’ qualitative shares over the past three years.

Recma’s next Qualitative report will be issued in March 2016, based on research through February. The company noted that between now and then a number of big media pitches will likely have been decided that “could impact the rankings.”