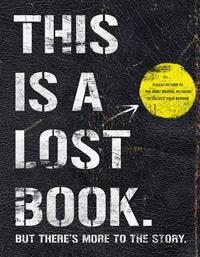 The Andy Warhol Museum is taking a page from Charlie and the Chocolate Factory and its golden ticket by hiding more than 150 specially designed books throughout the museum's home city of Pittsburgh, PA over the next two months. When discovered, each book invites the finder to return it to The Andy Warhol Museum to learn the rest of the story.

This scavenger hunt has been developed by its agency Marc USA to raise awareness about The Warhol’s new exhibition Warhol By the Book. When all the books are returned to their designated places on a large bookshelf in The Warhol’s entrance space, they will complete the image of one of Andy Warhol’s many works in the medium of books featured in the exhibition.

There is also a Web site dedicated to the book hunt, which will provide clues and track each book as it is found. Clues to the location of each book will be revealed through The Warhol’s social media accounts, including Facebook and Twitter. Searchers should keep a sharp eye for books in notable Pittsburgh landmarks, restaurants, cultural attractions, and local universities.

Book finders are invited to post photos of their discoveries using #warholbookhunt.  They will also each receive two free admission passes to The Warhol, a discount at The Warhol Store and be eligible to receive a special gift from the museum.

“Our goal is to help people understand that each visit to The Warhol offers a brand new experience," says Michele Fabrizi, Marc USA president and CEO and Chair of The Andy Warhol Museum Board. "The Warhol’s By the Book exhibition is great proof. It provides a surprising look into Andy Warhol’s creativity and his ideas about art through works that defy and question the common notion of what a book can be.”

Marc USA has worked with the museum for three years. The Andy Warhol Museum is one of the four Carnegie Museums in Pittsburgh.