Great Caesar's Ghost! 'Supergirl' Has Lost A Third Of Its Audience 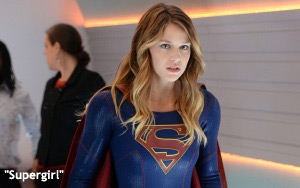 The pre-launch publicity for “Supergirl” was great. The show? Not so much.

That’s one conclusion you might reach when considering the dropoff in audience that has been experienced by “Supergirl” since its premiere Oct. 26 on CBS.

At first, her ratings were super. Then they got weaker, and then weaker again, as if the show had suddenly been exposed to kryptonite. Well, here in the real world, kryptonite is not a factor. But a show not meeting expectations is a reality we sometimes have to live with.

Here’s what happened: “Supergirl” premiered amid a superlative publicity campaign that was so effective there was barely a person in America who didn’t hear about it. It was ballyhooed in old media and new -- on CBS, of course (particularly during the football games on Sunday, Oct. 25, the day before “Supergirl” premiered), and all over social media, where younger viewers -- the group of people who seem to love superhero movies and TV shows -- were well-informed of its pending premiere.

How can this be? One answer that is not unreasonable (and possibly simplistic) is that many people sampled the show on Night One following all the pre-launch hype, and then didn’t come away caring enough about plucky Supergirl to tune in for Week Two. The question remains, however: Is that really enough to explain why so many of them didn’t return?

Here’s the part of this blog post where I would ordinarily be expected to expound on the merits -- good, bad or indifferent -- of “Supergirl” in an effort to identify something in the show’s quality that might tell us why a third of its premiere-night audience disappeared within a week.

But I cannot help you here. I am not a particular fan of superhero stories, and I have no idea what attracts people to them. To me, “Supergirl” looks like it should be working. It has a likable, fresh-faced lead in this Melissa Benoist who plays her, and there are plenty of near-catastrophes and bad guys for her to battle in every episode. And there are even some twists in her story.

For example, in Episode Two, as Supergirl was getting her bearings in her new role as a superhero in fictional National City, she learned that super powers alone are not enough to make a superhero super.

Sound judgement gained from experience is also necessary, which became apparent when Supergirl used her super-strength to move an oil tanker away from a dock where a fire was raging. In the process, she accidentally tore a big gash in the ship’s hull and caused a devastating oil spill. The local media then vilified her as a menace -- demonstrating that it’s not necessarily a given that a city will welcome the appearance of a self-identifying hero with outsized powers.

It was a clever and welcome angle on the stale, old superhero scenario, although for all I know, others have taken this approach too. I’ve already admitted I’m not exactly an expert on superhero stories. But I do have an opinion on one aspect of this new “Supergirl” series that I have observed.

In addition to her dramatic rescue of a crippled airliner in Episode One and her various face-offs with bank robbers and other thugs, the show has a running storyline concerning a shadowy government agency that battles aliens and has recruited Supergirl to work with them since all the intergalactic baddies seem to have superpowers just like she does.

When I watch this show, the intrusion of this continuing subplot stops the show in its tracks. It’s dead weight, it’s not interesting and no one in the viewing audience can relate to any of it. The entire thing should be jettisoned and the show should concentrate its focus squarely on the struggle of this young woman to fit in, while at the same time celebrating the qualities that make her different and also special.

Talk about relatable: Isn’t that what everyone is into these days?

tv
2 comments about "Great Caesar's Ghost! 'Supergirl' Has Lost A Third Of Its Audience ".
Check to receive email when comments are posted.
Read more comments >
Next story loading