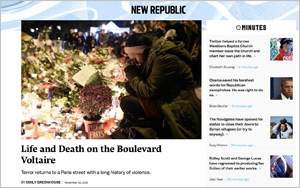 The New Republic unveiled a redesigned Web site and new editorial formats, the site’s first major revamp since the co-founder of Facebook, Chris Hughes, purchased a majority share in the company in 2012.

The redesign introduces opportunities for advertisers, with a new ad strategy: “impact without distraction,” the company states.

The launch partners for the redesigned site include Casper and Nuclear Matters.

New Republic’s redesign is a manifestation of Hughes’ ideas for the future of the publication. Two editorial formats were introduced that focus on mobile-first, shareable editorial content.

The publication earns over 50% of its traffic from mobile. 60% of the multiplatform audience is between the ages of 18 and 44, with female readership comprising 43% of the overall audience.

“We need to be the voice of creative thinkers who are united by the collective desire to challenge the status quo,” stated Guy Vidra, CEO of the New Republic.

Signal, the other new editorial format, is a shareable element on every article page, a feature that gives a soundbite of every story’s argument.

"We've historically appealed to a pretty traditional demographic, but we're now making a concerted effort to reach out to a much younger and diverse group of people — insurgent thinkers who are suspicious of the status quo, and care about the way the world works," Hughes said. "The data says those people are more likely to read our site on mobile phones."

The site now features larger typography and images. The publication removed sidebars and the navigation is hidden behind a hamburger menu icon.
magazines, mobile, redesign, web sites
Next story loading