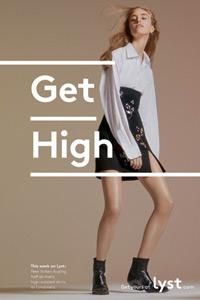 The 10 images were shot by British fashion photographer Charlotte Wales, whose editorial work has appeared in Vogue, POP and Dazed & Confused.

Lyst's partnered with creative agency Anomaly for the campaign. The photos will appear for a month in New York and London across a variety of media, including billboards, wild postering, taxi media, street marketing and social and influencer marketing campaigns.

Chris Morton, CEO and co-founder of Lyst, explained that the campaign is a manifestation of the company’s ability to bring together “insights from data science with the emotional nature of fashion.”

“...These two worlds are combined in a seemingly dissonant form, celebrating the power of beautiful fashion imagery and the intelligent insights into the fashion consumer's behavior,” he stated.

For example, “Get High” refers to New Yorkers buying half as many high-waisted skirts as Londoners. The photo shows a young blonde model in a high-waisted, embroidered skirt.

"Rip Off" alludes to the six-fold increase of Lyst shoppers searching for velcro shoes.

“Drop More Acid” encourages New Yorkers to buy more acid washed denim, as Londoners out shop them on this trend.

Lyst also announced today that Christian Woolfenden will be joining as Chief Marketing Officer in January 2016.

Launched in London in 2010, Lyst connects shoppers with over 11,000 designers and stores. The company was the first to launch a “universal cart” for a fashion site, allowing shoppers to check out from multiple retailers in a single location.