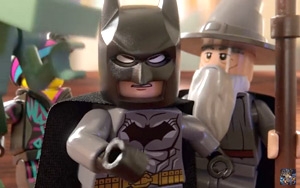 When people hit the stores Thanksgiving Weekend, new data from the International Council of Shopping Centers (ICSC) shows that toys will be on their mind.

And while it’s too early to say if this season will have a Tickle-Me Elmo, the 66% of American adults who plan to buy toys say Lego Dimensions Starter Pack, Paw Patrol Paw Patroller, and Hot Wheels Ultimate Garage are high on their list, as are the Star Wars Bladebuilders Jedi Master Lightsaber, Mattel Barbie Dream House, Marvel Hulk Smash Vehicle, and Doc McStuffins Take Care of Me Lambie.

Overall, ISCS says 71% of its respondents intend to buy something over the Thanksgiving holiday period, with 59% saying it will be at a physical store. About 15% plan to shop in a store on Thanksgiving Day, and 41% say they will do so on Black Friday. Interestingly, even though Cyber Monday is intended to be a day devoted to online shopping, 32% of the survey, based on about 1,000 responses, intend to shop in a brick and mortar store. That’s even more than on either Saturday or Sunday (both 30%) of the long weekend.

The association says it’s just one more indication that people are blurring distinctions between physical and online channels.

Kantar Retail’s research also indicates that Cyber Monday likely to be the shopping day with the biggest increases. “The attitudes about and approaches to shopping on Black Friday have changed over the past few years,” it writes in its analysis. “Fewer shoppers feel Black Friday deals are better than other holiday season sales. And a growing share consider Black Friday shopping more about friends and family time than the deals.”

Kantar also reports that consumers have the jolliest outlook in seven years as they head into the holidays, with 7 in 10 planning to spend the same amount or more as they did last year. And so far, it says Amazon is winning, attracting more holiday shoppers than any other store so far. It’s especially true for Prime members, with more than 50% already buying a holiday gifts.