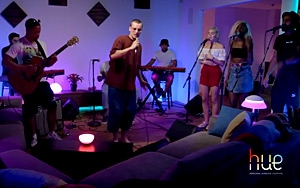 Music and lighting are made for each other. They both set the ambiance of a room and contribute to its overall mood.

So naturally, Royal Philips and Live Nation Entertainment are partnering on a marketing program that merges the latter’s music with the former’s Hue Internet-connected and ever-changing light bulbs.

“We’re always looking for opportunities with our emerging artists, and we’ve found lighting is endemic to what we do every day,” Maureen Ford, president of local alliances at Live Nation, tells Marketing Daily. “The uniqueness and immersive nature of the [Hue lighting] was what appealed to us.”

The new program, “Living Light Sessions,” shows emerging Live Nation artists performing songs in rooms outfitted with the Philips Hue connected lighting system. The first recently released video features Rudimental, a London-based band, performing their single, “Lay It All On Me.” The program also features members of Rudimental talking about the importance of lighting and color in creating their music and experimenting with the system.

“The artists themselves will tell you that setting the stage is one of the first things they’ll talk about,” Ford says. “If you talk to artists, sound is the most important [element], but second to that is lighting.”

The partnership, according to Philips, is a natural step along the brand’s efforts to show how connected lighting systems can change a home entertainment environment. Previously the brand has also worked with SyFy network programming, using audio cues from certain shows to create ambient lighting effects.

“Our goal is to elevate light beyond illumination. and we continue to see Philips Hue enthusiasts getting creative and using their imaginations to unlock new ways to use our connected lights,” said Scott Martin, chief marketing officer, Philips Lighting North America, in a statement. “Music provides the perfect opportunity for people to create new immersive experiences every day in their homes.”

In all, the entertainment management company expects to feature six of its emerging artists (Ford would not say which ones might be feature) in monthly installments of the Living Light Sessions. The videos will be promoted through both companies’ social media channels as well as through the artists’ own channels, she said.