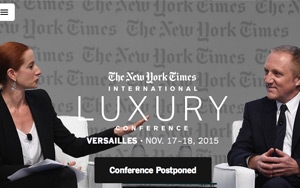 While the human toll of the Paris terror attacks rightly dominates public attention, publishers are also dealing with disruptions to their business, including cancellation or postponement of planned conferences and expos in one of the world’s most-visited cities.

On Monday The New York Times announced it will postpone its International Luxury Conference, originally scheduled to take place at Versailles from November 17-18, until a date in spring 2016, as yet to be determined.

New York Times International president Stephen Dunbar-Johnson released a statement which read in part: “In the context of what has occurred, the declared State of Emergency in France and the three days of national mourning, it would be inappropriate to hold the conference at this time.

"The New York Times remains committed to holding the International Luxury Conference in France, and we are working now with our venue partners to reschedule the event for next spring.”

The NYT announcement came as French President Francois Hollande addressed an extraordinary session of both houses of the French Parliament at the Palace of Versailles, declaring that France is at war with Islamist terrorists, including ISIS, and asking for a three-month-long extension of the state of emergency declared Friday.

The NYT International Luxury Conference was scheduled to take place at the Trianon Palace in Versailles, which is part of the larger Palace of Versailles complex.