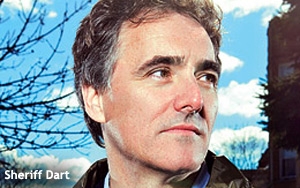 The appellate court's order came just three days after a hearing at which Circuit Judges Richard Posner and Diane Sykes suggested that Dart crossed a line by complaining about Backpage to Visa and MasterCard.

"A police official has to be very careful in what he says," 7th Circuit Court of Appeals Judge Richard Posner told Dart's attorney, Hariklia Karis, at a 45-minute hearing on Friday.

The online classifieds site sought a restraining order against Dart earlier this year, shortly after Visa and Mastercard said they would no longer process payment for transactions on Backpage.com. The credit card companies announced their decision soon after Dart wrote to the companies -- on official letterhead -- and asked them to stop allowing their credit cards to be used to purchase adult services ads. Dart, like many other observers, says that many of Backpage's "adult" ads are actually prostitution ads.

Backpage -- which argues that it isn't responsible for crimes committed by users -- said its business was jeopardized as a result of Dart's letters to Visa and MasterCard.

U.S. District Court Judge John Tharp in the Northern District of Illinois initially accepted Backpage's argument, but later rejected the company's position. Among other reasons, Tharp said that Dart had a free-speech right to voice his opinion to the credit card companies. Tharp also said there was evidence that Mastercard and Visa were considering ending their relationship with Backpage before he got involved.

The appellate judges signaled on Friday that they weren't convinced by Tharp's conclusions. Circuit Judge Diane Sykes told Dart's attorney that his letter "goes well beyond the expression of opinion."

"This is a cease-and-desist letter, and requires an immediate response," Sykes told Karis. "It's on his official stationery, and he's expressing himself as the sheriff of Cook County."

Backpage's lawyer, Bob Corn-Revere, argued on Friday that the case could have a sweeping impact on free speech. "The issues here go far beyond any impact on Backpage," he told the appellate judges. "This issue of trying to put pressure on intermediaries to regulate speech that is disfavored by the government has broad applications, and if Sheriff Dart is not enjoined would be used as a tactic across the board."

The order issued on Monday also requires Dart to send a copy of the injunction to Visa and MasterCard.