El Of A Premiere: 'Chicago Med' Charges Out Of The Starting Gate 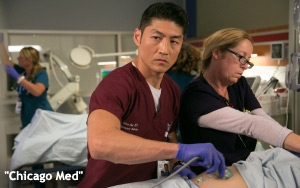 Amid all the life-and-death situations packed into the series premiere of this new hospital drama called “Chicago Med” on NBC, I kept asking myself some real-life questions.

For example, where’s the part where the doctor doesn’t return your phone calls? And what about those times when you go and have some procedure based on the recommendation of a doctor, and then your insurance company says it won’t pay for it because you didn’t seek the insurer’s permission -- i.e., “certify” the procedure -- beforehand?

And where exactly are these emergency rooms where all of the staff members are alert, responsive, highly efficient and work together in such concert?

Well, as we all know, these places exist on television. And if you are willing to suspend your skepticism because your experience in the real world has been so different, then “Chicago Med” is a very worthy addition to the canon of TV hospital shows.

Premiering Tuesday night at 9 Eastern on NBC, “Chicago Med” has the distinction of being the last new show of the fall season to finally have its premiere. It’s from executive producer Dick Wolf, who has set up shop in Chicago after years of spinning off “Law & Order” shows in New York. “Chicago Med” now joins “Chicago Fire” and “Chicago P.D.” in Wolf’s newly established stable of Chicago-based dramas.

Chicago Mayor Rahm Emanuel even turns up – playing himself – in the first scene of the premiere episode of “Chicago Med” at a dedication ceremony for this new emergency-medical facility where he is thanked by the facility’s administrator (S. Epatha Merkerson) for his support. So now, in another first, a politician takes credit for the role he played in establishing a fictional medical facility.

Thankfully, Emanuel’s role in “Chicago Med” is short-lived as a train on the Chicago El derails and plummets to the street. Soon, the new emergency room at fictional Gaffney Chicago Medical Center is flooded with injured passengers.

One of the hallmarks of hospital emergency-room shows, at least since “St. Elsewhere,” is the creation of unique medical situations that are meant to vex viewers and fictional doctors alike. In the premiere of “Chicago Med,” one such quandary involves a woman severely injured in the accident who happens to be several months pregnant with a child that isn’t hers. She’s a surrogate and the couple whose baby she’s carrying is faced with deciding whether to save her life, even if the surgery the doctors recommend imperils the life of their unborn child.

Elsewhere, a gravely injured man -- unconscious and near death -- is discovered to have a diamond ring in his backpack that he meant to present to his long-time girlfriend that very day. She in turn is then faced with deciding whether to OK the harvesting of his organs, two of which -- his lungs –- will then be transplanted into a teenage boy with a respiratory illness that might kill him unless he receives the new organs.

And so it goes -- just another day in TV Emergency Room Land. The fact is, however, that “Chicago Med” is a very appealing show, reminiscent of “ER,” which was one of the best shows of this type in the history of television.

For one thing, the premiere of “Chicago Med” has a “lived in” quality that is rare for the first episode of a new TV show. Unlike most such shows, “Chicago Med” seems to come to the air fully formed. The episode is not bogged down by a lot of unnatural exposition that in so many other shows involves various characters suddenly reciting a long soliloquy outlining the particulars of their life story. In “Chicago Med,” we learn a little here and a little there about these people, but plenty is left out for us to learn later on.

Of course, that depends on whether viewers will return for more in later episodes. On that score, the prognosis looks good for “Chicago Med.”