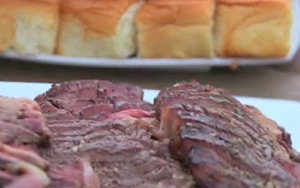 King's Hawaiian is the first brand to have a custom show created by Scripps Networks Interactive for airing on three of its channels: Food Network, Cooking Channel and Travel Channel.

In the half-hour special, "Taste of Hawaii," chef Jon Matsubara spotlights Hawaiian chefs and their recipes, and the islands' indigenous foods and ingredients.

The show includes a segment on the origins of King's Hawaiian bread, which also makes appearances as part of various meals prepared during the show (as in shot shown above).

Behind-the-scenes footage and other Hawaii-themed content is being featured on Scripps Networks’ lifestyle video syndication platform.

The King’s Hawaiian show is also being promoted on the networks' Web sites through home page takeovers and custom ad units with recipes. A preview video has been promoted on the brand's social media channels, including YouTube.

The show is one element in a two-year brand-building partnership between King's Hawaiian and Scripps Networks.