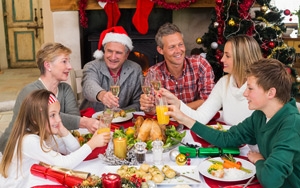 While most experts expect people will increase their overall holiday spending this season, they may cut back in some less predictable ways, including more frugal holiday meals. And in another shift, consumers seem to be stepping away from gift cards.

IRI MarketPulse saw shopper sentiment slip in the third quarter, the second consecutive decline. It’s chalking the gloomier mood up to people feeling pinched by stagnant wages, health care and education costs. About 32% of its sample say they will spend less on their holiday celebrations this year, which it says will translate into flat sales for the consumer products category over the holiday period. And they’ll cut back by stepping up their favorite frugality tactics, including making lists before heading to the store (62%), cutting out coupons (54%), buying more private label products, and using store or credit card points for purchases (29%.)

While food spending in the four weeks leading up to Hanukkah and Christmas is likely to be flat, IRI says that’s because price increases are masking a decline in volume. It predicts the biggest cutbacks to come in meat and seafood, which typically account for about 22% of holiday food budgets. Spending on alcoholic beverages, about 20% of family budgets, is likely to remain stable.

The good news, IRI says, is that consumers don't think they’ll have to be tightening their belts for much longer, with many of them saying they are optimistic about next year. In the overall sample, roughly a third predict their finances will perk up in 2016, with 48% not expecting much of a change. But younger consumers are much more upbeat, with 29% of those between 18 and 34  expecting the economy to get better for them in the coming six months, compared with 21% of those over 55-plus. And 57% of Millennials think their finances will be better one year from now.

Another area where consumers plan to spend less is gift cards. The National Retail Federation says that even though gift cards are what most people want to get for Christmas, people aren’t so crazy about giving them any more. In its latest survey, consumers say they plan to spend an average of $153.08, compared with $172.74 last year. (The average per card is $44.83.) That marks the first decline in gift card spending since 2009.