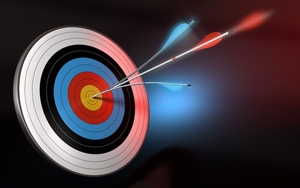 Up until now, accurately targeting a consumer with an advertisement across screens has required the user of the devices to sign into a platform. But now several companies are working independently to perfect ad-targeting platforms using the brand's first-party data, programmatic, keywords, and a bunch of intent signals that focus on humans rather than devices.

Yahoo and Rocket Fuel have separately developed methods to target consumers with advertisements based on millions -- if not billions -- of data points from a variety of intent signs and media across devices.

Search and native advertising platform Yahoo Gemini introduced Wednesday the ability to target users with native ads on Yahoo and partner inventory based on consumers' actions within the advertiser's own apps. The company also recently launched a custom audience feature that allows advertisers to integrate their own first-party data alongside Yahoo data to retarget audiences across devices.

Yahoo says the idea to target interests makes use of billions of data points that signal intent. It reaches across screens, reengaging customers who have already shown interest in the products, supported by data from the brand's Web site or a list of mobile device IDs.

The platform offers three times more click volume within its search ad marketplace, based on growth between April and August 2015 -- split between desktop and mobile devices, according to Yahoo. Through its network it can reach up to 1 billion global consumers and 600 million monthly mobile users, targeting interests that signal intent. The platform reaches across screens, reengaging customers who have already shown interest in the products, supported by data from the brand's Web site or a list of mobile device IDs.

The next phase of cross-device ad targeting requires marketers to "focus on the human" because a consistent cloud-based profile of someone makes the device irrelevant, says Microsoft CMO Grad Conn, in a separate discussion. Conn believes cloud computing will support targeting techniques as devices become disposable.

This is not an entirely new vision. Sun Microsystems execs shared the foresight years ago before Oracle acquired the company in 2010. Employees got key fobs to securely access the company's system from any computer in the world without carrying a device. It enabled employees to access their business files via the cloud.

Rocket Fuel CEO Randy Wootton calls it "people centered marketing." Understanding the time of day, where the person accesses the content, and the time of day are data points to pull into the targeting platform. Today, the company processes more than "90 billion requests daily, and of that 40 billion gets ingested into the algorithm systems, which is … times more than Google generates," he says. "It's that type of connection we're using to build out our data infrastructure."

Cross-device targeting requires companies like Microsoft, which uses Rocket Fuel's platform for business-to-business marketing, to have a consistent view of the customer. It's easier in a b2b world, but could also apply to consumers.