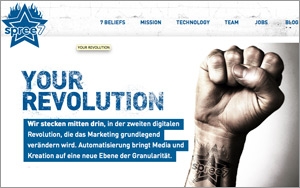 In an effort to expand its programmatic offerings in German-speaking countries, demand-side provider MediaMath is acquiring Spree7, a programmatic platform based in Berlin, for an undisclosed sum.

Germany has lagged behind in programmatic media, but the slow growth represents an opening for software platforms looking for a fresh market. According to eMarketer, Germany’s ad spend increased from €26.86 billion ($35.64 billion) to €28.04 billion ($37.21 billion) between 2013 and 2014, a shaky time for other Eurozone countries.

Dave Reed, MediaMath's managing director of EMEA (Europe, Middle East and Africa) stated in a press release that expanding in the DACH (Germany, Austria and Switzerland) region is an important step as an ad vendor trying to offer reach and scale to global brands. Spree7 has worked with MediaMath’s TerminalOne operating system for several years, and with the acquisition, the company can offer programmatic to businesses in the DACH region with local market knowledge and programmatic expertise.

“The region is rapidly adopting programmatic tech,” Reed stated. “We want to work with more clients in the region and help our global clients expand into those markets.”