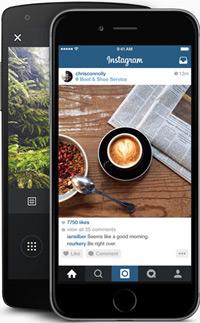 The popular Facebook unit also announced major revisions to its API policy, which puts the future of Instagram-reader apps in jeopardy.

Among other changes, Instagram will no longer allows third-party apps to pull in Instagram feeds in their entirety. As such, apps that help users browse theirs feeds on unsupported platforms, like Apple TV, will likely be affected by the new changes.

The changes are designed to “improve people’s control over their content and set up a more sustainable environment built around authentic experiences on the platform,” according to Instagram.

Existing apps have until June 2016 to resubmit their apps for approval.

The changes threaten to unsettle relations between the developer community and Facebook, which has recently endeavored to do just the opposite.

Among other efforts, Facebook launched a mobile ad network last year that included a two-year core API stability guarantee. The guarantee aimed to give developers advance notice before pushing changes, and covered issues like login sharing, requests and SDKs.

Instagram also recently began offering its API to outside parties, including brands and their developer teams. The hope is that the change would encourage brands to plan, buy and execute their campaigns on the popular social network.