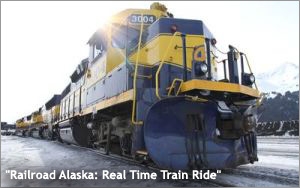 Whether or not a televised 500-mile train trip across Alaska is “monotonous” is a matter of personal taste.

Nevertheless, the Discovery-owned network called Destination America has a warning about this particular journey. “Is the Yule Log too exciting for you?” asked a press release from the network that arrived on Wednesday. “When turkey isn’t enough to put you to sleep on Thanksgiving, Destination America has the snoozefest you need.”

It’s a TV show called “Railroad Alaska: Real Time Train Ride.” On the show, “you will see nothing -- or almost nothing -- other than what the cameras themselves see attached to the train,” the press release said.

“Simply park your caboose on the couch and settle into a mesmerizingly monotonous holiday edition of Destination America’s hit series ‘Railroad Alaska’.” This unscripted series, which is not boring or monotonous at all, started its third season last Saturday.

The five-hour, 500-mile railroad trip inspired by the show runs from 9 a.m. to 2 p.m. Eastern on Thanksgiving. It will then be repeated for another five hours, the network says.

Personally, I think this is a great idea -- and one that is descended from the very Yule Log this press release references. As everyone knows, the Yule Log is a “show” that airs every Christmas in which a warm, cozy fireplace in full crackling glory is shown for several hours as an on-air placeholder. This allows most of a TV station’s staff to take at least part of the holiday off.

The original Yule Log started in New York on WPIX/Ch. 11, but versions of this filler material are seen on a number of networks on Christmas Day. This single-camera train ride coming to Destination America on Thanksgiving is a welcome innovation. And it got me thinking about other such possibilities for other cable networks. Any of these networks are free to adapt any of these ideas, for a reasonable fee, of course:

“Chew on This!,” Animal Planet: A green rolling pasture is the setting for this single-camera, non-intrusive look at cows amiably grazing on grass. The folks at Animal Planet (also owned by Discovery) might position this show as “moo-notonous” in a press release, but bovine enthusiasts will say otherwise.

“Slow-Cook Simmer,” Food Network: Place a camera above a large pot in which a dish such as a stew or homemade soup has been set on top of a stove to cook slowly on low heat and there you have it -- a homey example of holiday video wallpaper that’s every bit as warm as the Yule Log’s crackling fire.

“Watching Paint Dry,” HGTV: You’ve likely heard someone describe something as so boring it was like watching paint dry. Well, here’s the real thing -- actual paint drying. Is it really as boring as everyone assumes it is? You be the judge.

“Goldfish Bowl,” Nickelodeon: With the word “Bowl” in the title, this show plays off of the popularity of college bowl football games during the holiday season, although gridiron action has nothing to do with this. Small children and your pet cat will be enthralled by this look at goldfish in their native habitat -- a round, glass container on someone’s kitchen counter with some marbles on the bottom. Warning to any network contemplating this: Tape it in advance, so you can edit out any unfortunate goldfish deaths that might occur at any time without warning.

“Real ‘Real Housewives Of New Jersey,’ Holiday Edition,” Bravo: Set up a single camera outside the entrance of a supermarket somewhere in the North Jersey suburbs to capture all the action as the region’s wives and husbands head to the store on the morning of Thanksgiving or Christmas to pick up last-minute items they forgot previously. Not only will this show be an illuminating look at this unique subculture, but it will give the tireless Andy Cohen an opportunity to take a few hours off from work.

On this subject, everyone is entitled to his or her opinion, but speaking for myself, I happen to love a long train trip.