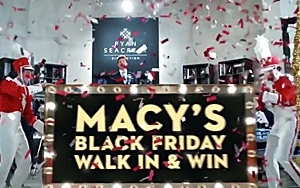 In another indication that people’s desire to dive into the holiday shopping fray is on the wane, the National Retail Federation expects a few less consumers storming through malls this Thanksgiving Day weekend. It estimates that 135.8 million people, or 58.7% of the U.S., may shop over the long weekend, including Turkey Day itself. Last year, its survey forecast that 141 million, or 61.1%, would do so. (In its follow-up research, it found that only 55% actually did so.)

For several years, experts have been speculating that consumers’ growing digital savvy, and the confidence that they can track down the best prices by using the Internet, has made retailers’ holiday promises of “best deals ever” less credible. And shoppers are definitely shopping earlier: The NRF says 60% had already begun by Nov. 10.

Still, 135.8 million people will put a lot of jingle in retailers’ cash registers. And despite plenty of headlines about people resenting stores for opening earlier and earlier on Thanksgiving—JC Penney is welcoming crowds at 3 p.m., before many Americans even have a chance to carve their birds—some research indicates most people just don’t care. A survey just released by Vennli, a software company, finds that 87% say the decision to open or close on Thanksgiving has absolutely no impact on their decision to shop there.

“The importance of Thanksgiving weekend to both retailers and consumers will never change. However, retailers have already given consumers several good reasons to start their holiday shopping earlier,” says NRF President and CEO Matthew Shay, in the release announcing the forecast. “We suspect early holiday shoppers could still be on the fence about whether or not to try their hand at finding online and in-store deals Thanksgiving weekend.”

And retailers are pulling out all the stops to reach them. Macy’s is running a new ad just for Black Friday, with Ryan Seacrest wrangling Macy’s stars Ariana Grande, Heidi Klum and Jessica Simpson, not to mention ever-judgy Martha Stewart. Besides reminding them about the 6 pm Thanksgiving opening times, it’s also pushing $1 million in prizes.

Walmart is also going for humor, running an ad promoting its store map and app for Black Friday, with singer Craig Robinson.