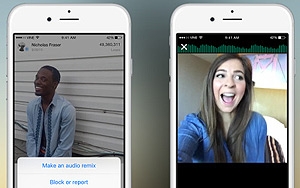 Trying to keep users engaged, Vine is inviting them to remix any audio they can find within the network.

The new features should make it easier for users to add their own spin on popular and trending Vines, according to Kristian Bauer, iOS Engineer at Vine.

“When Vines blow up and create new trends, people join in by creating their own versions or remakes of the original,” Bauer explains in a new blog post. “With this release, we’re bringing audio collaboration to Vine.”

To start remixing, users will need to tap “…” under a Vine, and then tap “Make an audio remix.” This will take them into camera mode, with the audio already loaded in the progress bar. Then, users have to touch the screen to record or import videos from their camera roll to make a Vine as they normally would.

Additionally, Vine is adding discovery features so users can find Vines that use the same audio clip or song. When someone uses the new audio tool to make a Vine, the network will display info for the source Vine. This means that users can see the original Vine from which a remix or remake was created.

Vine has also added song metadata as an input to Search. This means that when users search for a song in the Explore page, they will see Vines that use that track.

For Vine, the new features are part of a broader effort by sing a sweeter tune. This summer, it added several music-editing tools, including a Snap to Beat feature that helps users create perfect loops -- so looping songs will sound continuous and uninterrupted.

This summer, Vine also rolled out a new Featured Tracks section as a new way for users to discover music. With the feature, users can also find out exactly what they’re listening to as they watch Vines. When they see the music note on a Vine, they only need to tap it to reveal details about the track.

To maintain its edge, Vine has recently made a series of improvement to its clip-streaming service. The service recently became easier to navigate thanks to a new list of suggested Viners, and it added an HD broadcasting and viewing option.