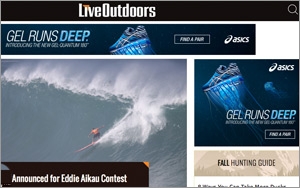 As part of the relaunch, the LiveOutdoors Web site got a new look with increased emphasis on visual elements, including images and video. It also features a range of new content related to its main sub-verticals of hunting, fishing, recreation and motorsports.

These include a number of editorial and video blogs, like “Adventure Tripping,” focusing on exotic and hard-to-reach destinations; “Get Out Alive,” on wilderness survival;  “Pushing Limits,” on extreme outdoor sports; and “Mother Earth,” on environmental issues.

The site is also adding editorial staff, with David Rosenfeld joining as managing editor, and Rich Wright joining as an expert instructor in wilderness survival.

On the business side, LiveOutdoors is rolling out new native ad options, many of them tied to the new content categories described above, as well as seasonal guides devoted to hunting, fishing, camping.

The LiveOutdoors relaunch comes not long after CraveOnline relaunched its flagship Web site of the same name. As part of that relaunch Crave, already known for its coverage of music, gaming, sports and entertainment, added new channels focused on culture, art, design and style.