Classic Carson Shows Are Coming Back - But Will Anybody Watch? 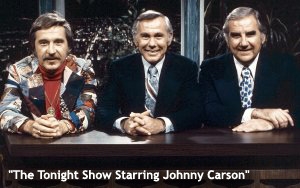 To many, Johnny Carson is the closest thing TV has to a god, so it seems like a no-brainer that a TV channel devoted to showcasing vintage TV shows would go to a great deal of trouble (and presumably expense) to obtain the rights to air his old “Tonight” shows.

So here they come -- back to TV for the first time since Carson said good-bye in 1992. On Jan. 1, Carson’s one-hour “Tonight” shows will begin airing nightly at 11 p.m. Eastern on the channel known as Antenna TV, a digital channel owned by Chicago-based Tribune Broadcasting. Look for it on your local cable system; it’s available just about everywhere (it reaches 88 percent of TV households, according to the company).

The folks at Antenna TV labored long and hard to strike a deal with Carson Entertainment Group to acquire the rights to air all the “Tonight” shows that Carson owned -- the ones that aired from 1972 to 1992. Among the challenges was getting clearances for music, movie clips and other elements within the shows that anybody might squawk about or demand payment for.

The shows will be aired in full, and sometimes “curated” into various groups such as “comedians,” for example, where in a given week, you might see the shows in which comics such as Jay Leno and Jerry Seinfeld made appearances earlier in their careers.

An effort will be made to schedule specific shows at around the same time of year in which they originally aired, particularly the shows that aired during holiday seasons. For example, the first show Antenna will air on Jan. 1 is a show from New Year’s Day 1982, in which Johnny’s guests were Eddie Murphy and McLean Stevenson. A bit of trivia: NBC still owns the “Tonight Show” title, so these Carson shows are being billed simply as “Johnny Carson.”

So those are the particulars. The more important question is: Will anyone watch them? While reviving the old “Carson” shows makes sense for a TV channel devoted to vintage TV shows, it’s also possible that the “Carson” show falls into a category of TV shows that many people will tell you they love, and might even claim they look forward to watching, but in actual fact, they won’t.

That’s not to say that no one will watch these shows. Undoubtedly, some people will. And who knows? Maybe Carson is so revered that these old “Tonight” shows will run counter to the conventional wisdom that shows such as these, whose content was current for exactly one night decades ago, might still hold enough fascination for people today that they’ll tune in regularly -- at least to see who’s on.

Still, there’s no way to sugarcoat this except to say that, despite Carson’s godlike status in the popular imagination, these old shows are dated -- from the guests and subject matter to the clothes and hairstyles.

The question of what gives some old TV shows longevity and others none -- has long vexed those in the TV business. Last August, for example, I wrote about the joys of watching reruns of “Perry Mason” on MeTV (a competitor to Antenna TV in the vintage-TV space) and it might have been the most popular blog post I have ever written here. For me, “Perry Mason” still works, and I watch it often.

Most of the time, timeless trumps timely, but where Johnny Carson is concerned, I hope that is not the case. And whether people tune in by the hundreds or thousands to watch these “Carson” reruns on Antenna TV, it’s nice to know they’re there and that Johnny is still to be seen on TV where he rightfully belongs forever.

cable tv, tv
3 comments about "Classic Carson Shows Are Coming Back - But Will Anybody Watch?".
Check to receive email when comments are posted.
Read more comments >
Next story loading