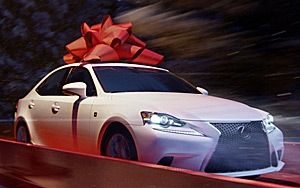 Lexus’ “December to Remember” year-end campaign is back, red ribbons and all. As with last year, the idea is that the supernatural delivery of Lexus vehicles as presents to peoples’ driveways turns out to have been a story told to a child by the parent who actually bought the car as a gift to the family.

New this year is a partnership with Barneys New York, which includes Lexus getting its own display as part of Barneys’ yearly tradition of dressing up its windows for the season with animated scenarios. The partnership also features retail product offerings, in-store promotions and a chance to win a $10,000 Barneys shopping spree.

Two Lexus TV spots, via AOR L.A., Calif.-based Team One, are central to the effort. The first starts with Santa in his workshop building a snow globe, tying a red bow on a Lexus ES sedan, sprinkling snow inside, and finally attaching the glass globe. After he puts the globe on a shelf it comes to life, and the camera delves into the real world inside, where the family is gathered in the driveway, with the father telling his daughter that Santa has a magic snow globe for every family.

The second spot goes to the North Pole, where a penguin presses a lever with his flipper, and a toy-sized IS sport sedan takes off onto a toy racetrack, running through turns and spirals, then turning into a real IS on a life-size racetrack, and then in a winter wonderland before stopping right in the family's driveway. As the dad finishes the story of how the car got there, his son says, “But Dad, penguins live in the South Pole.”

The racetrack theme is extended to the Barney’s window display, wherein three penguins are surfing on a Lexus IS, with GS F and RC F model cars racing around a track commissioned and created by famed slot car track designer Gary Gerding. An animation shows a penguin hero racing against his opponents, set to an imaginary world of ice formations, city structures, and ski lodges.

The vignette will also be replicated for the Barneys Beverly Hills, Calif. location, per the automaker. A behind-the-scenes video highlighting the displays’ design, development and installation will be featured on Barneys New York’s content site.

A third spot, “Teleporter,” is re-airing from last year's campaign. Two elves zap an RX to a family’s driveway through an ice-covered teleportation machine. The spot cuts to a dad telling his kids how Santa delivers the “big stuff.”

The TV buy includes network and cable television, and sports channels. A digital partnership with Roku will run targeted pre-roll across its network of apps, per Lexus, which says other digital assets will run on key automotive websites, and out-of-home extensions include placements in New York’s Times Square and D.C.’s Verizon Center. Print support includes four full-page ads in the Wall Street Journal.

In its flagship store, Barneys is displaying a 2016 Lexus LX full-size SUV as part of a promotion dangling a Barneys gift card ranging in value from $100 to $1,000. The retailer will also sell a one-off Lexus RC F remote control car is in the Barneys New York holiday mailer, in the retailer’s New York and Beverly Hills stores and on Barneys.com.

Lexus’ showroom will do a separate program next month, dangling a shopping spree at Barneys New York. The sweepstakes offers one grand prize of $10,000 and four first prizes of $5,000 in Barneys gift cards — along with travel, accommodations and a Barneys personal shopper.