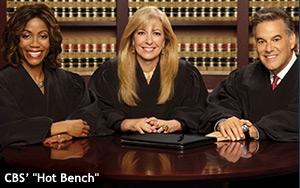 Against mostly declining programs, syndication court TV shows have seen growth this season -- with a majority up in viewership over a year ago.

Six of eight returning court TV shows have seen their season-to-date ratings climb so far this season, looking at Nielsen data from Sept. 8 through Nov. 9.

Court show leader CBS Television Distribution’s “Judge Judy” -- in second place overall among all syndicated shows -- is virtually flat for the year, down 1% to 9.706 million from 9.776 million.

Twentieth Television’s “Divorce Court” is down substantially --16%, to 1.8 million.

Among game shows, overall industry leader CBS’s “Wheel of Fortune” is down 2% to 10.1 million viewers, with its sister game show slipping 4% to 9.2 million. Twentieth’s “Family Feud” continues to grow, up 9% to 8.9 million.

Warner Bros. “Big Bang Theory” maintains its No. 1 status among all off-network sitcoms, down 3% for the year so far at 8.5 million viewers. Twentieth’s “Modern Family” is off 15% to 4.8 million.

CBS’ “Entertainment Tonight” still tops entertainment magazines -- down 8% for the year at 4.3 million, with CBS’ “Inside Edition” up 1% to 4.2 million.