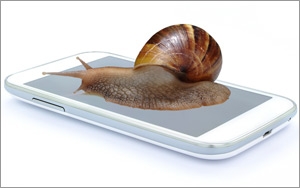 "In the 101 years since Congress created the FTC, the FTC has never successfully pursued a cause of action against an entity with the status of a common carrier," AT&T says in an appellate brief filed on Wednesday with the 9th Circuit Court of Appeals.

AT&T is appealing U.S. District Court Judge Edward Chen's decision to allow the FTC to proceed with an enforcement action. The agency alleged in a complaint filed last October that AT&T deceived consumers by offering them unlimited data, but slowing their broadband connections to a crawl after they exceeded a cap.

From 2011 until earlier this year, AT&T allegedly throttled more than 3.5 million customers who exceeded monthly allotments of 3GB or 5GB, depending on their phones. (AT&T recently revised its throttling practices and now only slows down customers who exceed 22 GB in a month; the company also now only throttles those users when the network is congested.)

The telecom says it implemented the throttling policy after Apple's introduction of the iPhone sparked a surge in mobile broadband use.

"Between 2007 and 2011, data traffic on AT&T’s network increased 20,000 percent (and is still rising)," the company says. "This unprecedented explosion in data consumption stretched the capacity of AT&T’s wireless network beyond its limits, causing dropped calls, unavailable cell sites, and frustration for AT&T’s customers."

AT&T is urging the 9th Circuit to dismiss the case on the grounds that the FTC lacks authority to bring an enforcement action against common carriers. The Federal Communications Commission reclassified mobile broadband as a common carrier service in February, when the agency passed a new set of net neutrality rules.

Chen, who presides in the Northern District of California rejected that argument earlier this year. He gave several reasons for ruling against AT&T, including that the FTC filed suit before mobile broadband was reclassified.

But AT&T maintains that the FTC lacks jurisdiction to prosecute mobile broadband providers, regardless of when the allegedly unfair conduct occurred. "It is a fundamental principle of administrative law that agencies may not take any action beyond the scope of their statutory authority. Wherever -- or whenever -- that authority ends, the agency simply has no power to act," AT&T argues.

Matt Wood, policy director at advocacy group Free Press, points out that even though AT&T is relying on the net neutrality rules in its battle with the FTC, the agency has also asked the D.C. Circuit Court of Appeals to vacate the net neutrality order.

"It is rich to see AT&T in two different appellate courts at once, simultaneously arguing in this case that its mobile broadband is a common carriage service -- and therefore not subject to FTC jurisdiction -- while telling the DC Circuit that AT&T's mobile broadband cannot be treated as a common carrier service," he says in an email to MediaPost. "This kind of heads-we-win, tails-you-lose hypocrisy is all too common, but rarely so transparent."

In addition to the FTC's lawsuit, AT&T also is facing a potential $100 million FCC fine for allegedly violating a 2010 rule by failing to adequately explain its throttling policies to consumers.

The FTC is expected to file arguments with the 9th Circuit by January.