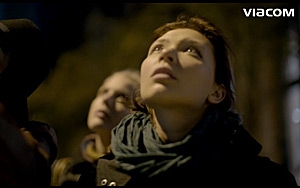 Viacom is encouraging people to take up their cameras (or, more likely, cameraphones) in support of the many causes championed by the company’s various networks.

Teaming with Witness, a global human rights organization founded by musician Peter Gabriel, the media conglomerate is working to inspire change through the power of video.

“Viacom and Witness are both dedicated to sharing the power of visual storytelling with citizens around the world,” Ali Tuck, vice president of corporate responsibility at Viacom, tells Marketing Daily. "This powerful collaboration was a great opportunity to give people the tools and resources to use the power of video to make a positive impact."

The effort includes television PSAs that are customized to speak to the unique audiences and initiatives of each of the Viacom brands represented in the campaign. Each spot highlights a specific channel's individual efforts by showing people reacting to videos that were projected onto iconic buildings in New York. One spot for BET, for instance, features videos and statistics (such as depicting that the percentage of African-American men pursuing secondary education is greater than that in American prisons). Another for VHI’s “Save The Music Foundation” shows a public music school teacher watching the videos of children playing instruments and explaining what it means to the kids at her school.

“Each of our brands uniquely address the causes that resonate with their audience in a way that inspires them to go out and tell stories they're passionate about,” Tuck says.

Each spot drives viewers to a co-branded website, witness.viacom.com, where they can get more information about how to use their camera phones in service of social change. (Topics include “How to film with a mobile phone” and “How to make videos for change.”) Viewers are encouraged to share their stories on Instagram using the hashtag #Story4Change.

“Our goal at Witness is not only to support people using video to promote social change, but also educate them on how to maximize the effectiveness of video,” said Witness co-founder Peter Gabriel, in a statement. “Our partnership with Viacom will help many more people understand the importance of filming as a tool for meaningful change.”