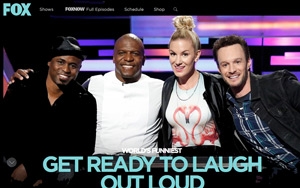 Fox says it will no longer release live program-plus-same day time-shifted ratings -- long a staple of measuring the health of a TV show. The decision is part of the TV network trend of pushing the business press to include viewing data from all sources.

“The same-day numbers also do not reflect how we monetize our content,” state Gary Newman and Dana Walden, co-chairmen of Fox Television Group. “Half of our TV ad inventory is sold on a C7 (average commercial ratings plus seven days of time shifted viewing) basis.”

They add: “We [also] monetize our content on digital platforms like Fox Now and Hulu and through TrueX sponsorships — none of which are included in Nielsen’s fast nationals.”

For nearly two years now, all major broadcast networks have been releasing their daily TV ratings data from Nielsen -- as well as offering projections over what those shows' viewership will be after three days, seven days and 30 days of time-shifted viewing in some cases.

During this time, TV networks have encouraged the business press to disregard live program-plus-same day time-shifted ratings, in favor of data including extended periods of time-shifting, as well as digital viewing estimates that they -- or third-party TV researchers -- release.

In response to this news, Brad Adgate, SVP, corporate research director of Horizon Media, says: “It's absolutely a sign of the future. Viewers -- especially younger viewers -- live in a nonlinear world when it comes to viewing. Other networks have in the past pointed out the growing insignificance of same-day ratings. The question remains -- how can the networks get revenue for time shifting especially past 7 days?”

The average commercial ratings plus three days of time-shifted viewing data is still crucial for TV advertisers when contracting with TV networks for their media buys. The problem with C3 data is that it is released about every two weeks.

Fox executives Walden and Newman also say that “more than one-third of viewing by people aged 18-49 is done outside the same-day window -- and that’s just over seven days. Fox has seven shows on the air that double (or more than double) their same-day audience across platforms this season.”