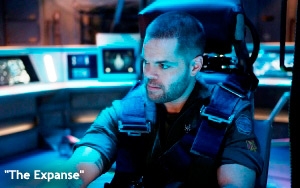 In the not-too-long ago olden days, a TV critic planned his columns and reviews by the premiere dates for new shows.

Got a new series premiering Thursday night? Then let’s try and get a review published Tuesday, Wednesday or Thursday morning, OK? It was always one of the key tools you would use to lay out your writing assignments for a given week. You’d ask: When is it on? And that would guide you in the writing of reviews or feature stories to run in advance of a show’s airdate, since running such stories and columns after a premiere would not serve the readers.

Now this great system that everyone loved and agreed to abide by is being turned upside down like everything else in the media world. A case in point -- and the reason for these throat-clearing opening paragraphs -- is this new outer-space series from Syfy channel that won’t premiere on the network until Dec. 14, but is being released today on VOD and online.

As I write this on Monday morning, the show is already out there and available, which means this review, technically, should have run before Monday. On the other hand, since readers can access this episode on these streaming services anytime they wish, a review such as this one need not be beholden to a specific premiere time -- say, 10 p.m. or the like.

And certainly, I get the strategy here: Attract the science-fiction faithful to this new series by offering this “advance” look at the show, which they will then hopefully like, chatter about it on social media, and then drive tune-in when the series starts up for real on Syfy next month.

I have no idea if such strategies work, but I suspect that the main reason would be one that has long determined the success or failure of TV shows, no matter where or when they air. And that would be the show’s quality -- which is often the subject of the second question a critic asks himself when considering a show for a review: Is it any good?

Where “The Expanse” is concerned, the answer is: Very good. Excellent, in fact. I watched the first episode (because even in this new world, a TV critic still gets to see a new show before everyone else), and I came away eager to see more.

“The Expanse” tells the story of a universe on the verge of war in the 23rd century. It is a situation caused by economic factors not unlike the ones that bedevil planet Earth here in the 21st -- wrangling over vital resources, the powerful vs. the weak, militaristic states threatening other states that are economically powerful but not as militaristic.

In “The Expanse,” the factions are Earth -- now ruled entirely by the United Nations; Mars, described as a militaristic planet; and a region of outer space identified in the show as the Asteroid Belt, where the water and air that Earth and Mars need are in abundance (and which they compete for) and a vast working class “mines” these necessities for intergalactic shipment to the two planets.

In Episode One, tensions between Mars and Earth are high -- a powder keg that only needs some relatively small incident to light a fuse.

I thoroughly enjoyed the first episode of this show. It looked great, the scenario came across as plausible (which is a huge challenge when creating these otherworldly outer space TV shows) and the writing was of such high quality that it occasionally bordered on literary. One nice touch is a race of workers in the Asteroid Belt who, for some reason, have evolved physically so that their arms and legs are unusually long and thin. In one scene, one such figure wearing only a loincloth is seen suspended from a dungeon wall looking like a Christ figure from an El Greco painting.

This represents a first for me -- referencing El Greco in a TV review -- and I have “The Expanse” to thank for it.

Episode One of “The Expanse” premieres Monday (Nov. 23) on VOD and online. The actual series premieres Dec. 14 on Syfy.