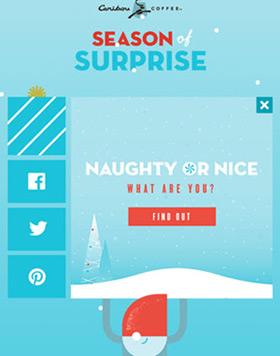 Caribou Coffee is aiming to delight customers with daily surprises in the weeks leading up to Christmas, including a couple that involve celebrities.

During its "Season of Surprise" campaign from November 5 through December 13, the coffee chain is offering treats such as special offers on beverages and interactive holiday games on a dedicated area of the brand's site (CaribouCoffee.com/surprise).

To drive traffic to the site, the surprises and the link are being teased each day on the brand's social media channels. The site is also being promoted with paid digital and social ads and signage in the chain's stores.

On Nov. 24, the brand — whose largest markets are Minneapolis, Denver, Des Moines and Atlanta — is sponsoring a "Holiday Hauler" bus to give 100 college students (50 from Minnesota State University, Mankato and 50 from University of Minnesota Duluth) free lifts home to Minneapolis.

Two big surprises are in store in December. On Dec. 10, the brand will host a pop-up concert featuring Minneapolis-born singer Mark Andrew, who was a contestant on both "American Idol" and "The Voice." Consumers will be asked to vote on Caribou Coffee's social media channels to determine in which of its top four markets the concert will be held.

On Dec. 15, Zach Parise, forward for the NHL's Minnesota Wild, will take over Caribou Coffee's social media channels and play "secret Santa." Parise will ask followers to share what they'd like to receive for the holidays, select some wishes to grant, and make on-the-spot videos of himself offering special messages, which he'll send to the recipients via social.

In addition to its existing seasonal beverages, the chain has this year added Ginger Chai Latte and Chai Nog Latte.

Caribou Coffee, which was acquired in late 2012 by German private equity company The Joh. A. Benckiser Group (also owner of Peet's Coffee & Tea Inc. and now Einstein Bros. Bagels), is headquartered in its hometown Twin Cities and now also in Denver.

Caribou is the second largest company-operated premium coffeehouse in the U.S., with more than 274 company-owned stores and 130 domestic license locations in 18 states, and 211 international franchise stores in 10 countries. There are also 12 new co-branded Caribou Coffee & Einstein Bros. Bagels stores around the country.