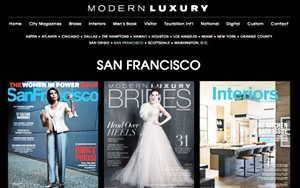 Silicon Valley will debut March 1, 2016 and will be published on a bimonthly basis.

Silicon Valley will be the 67th title in Modern Luxury’s portfolio, which covers 19 markets in the U.S., including Atlanta, Houston, San Francisco and New York.

“It is one of the leading wealth-generating markets in the world and has quickly become an influential center of culture and community beyond its technological roots,” she added.

Le has been a lifelong resident of the Bay Area. She was previously co-founder and editor in chief of Anthology Magazine. She was also editor at large for California Home + Design and a regular contributor to the San Francisco Chronicle.

She called Silicon Valley  "the epicenter of new business development, creativity and growth," noting it deserves a celebration of the people and places that make it "one of the world’s most exciting places to work and live.”

The publication is billed as an insider’s guide that will offer "sophisticated, thoughtful editorial content  of service and interest to the Silicon Valley resident and visitor alike,” Le added.

The magazine will launch with a qualified initial rate base of 30,000, distributed to select residences, luxury hotels, boutiques and real-estate offices.

The magazine will also be available for purchase at targeted newsstand locations and bookstore chains.