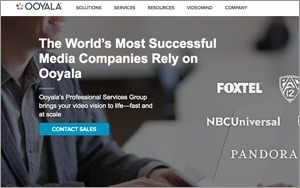 Ooyala, a subsidiary of telecommunications and media company Telstra, is launching an unbundled video analytics service that can be used on any device.

The product, Ooyala IQ, can also be used alongside video platforms including JW Player, Brightcove, Kaltura, thePlatform, Flowplayer and YouTube to measure content performance and audience engagement in real-time.

Jonathan Wilner, senior vice president of product and corporate strategy at Ooyala, said previously some devices, like Apple TV, weren't able to run Ooyala’s software. Now the company's customers will be able to understand their content performance regardless of device -- a necessary change given the many ways people consume video today.

Wilner added that the next version of the service, called IQ Pro, will offer more specific features for ad optimization, including enabling the right ad to load, and the right campaign for the right price analyzed against audience data.

Earlier this year, a report from Ooyala and Vindicia predicted OTT revenue would reach $8 billion to $12 billion in 2018, up from $4 billion last year. Ooyala was acquired by Australia-based Telstra last year.