Hey, P.R. People, Could You At Least Spell The Star's Name Right? 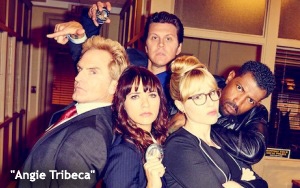 You know you’re in trouble when p.r. people can’t even be bothered to correctly spell the names of various principals in the TV show they’re supposed to be publicizing.
A case in point was a press release received Monday from TBS on behalf of this new comedy premiering in January called “Angie Tribeca,” which is supposed to be some kind of spoof of TV cop shows.

The release said the show is “from Steve & Nancy Carrell,” which is supposed to be spelled “Carell” the last time I looked. The fact is, though, I haven’t looked in a long time because Steve Carell is so famous that I don’t have to look. But for some reason, despite Carell’s fame, his name was misspelled in this release and, if memory serves, it may have been misspelled the same way in past releases about this show as well.

And by the way, identifying a show as being “from” someone gives no information about their role in it. What are they? Creators? Executive producers? Writers? Investors? What? Gee, here’s an idea: How about using a press release to provide information? Also, lose the ampersand.

While we’re on the subject of spelling, pity poor Hayes MacArthur. He’s a comedian and actor who is also one of the cast members on “Angie Tribeca” (that’s him top center in the photo accompanying this blog). At age 38, MacArthur has achieved some level of fame in show business, but he’s not known to many. That’s why it might come as a disappointment to him to learn that the TBS publicists on “Angie Tribeca” misspelled his last name as “McArthur” in this week’s release.

Oh, well. Maybe the publicists were too busy trying to bend over backwards to compose the nonsense sentences that comprised the bulk of this press release, in which we are told that this show is about a “tough outfit of detectives who refuse to shy away from dead bodies that are not alive.”

A few weeks ago in another blog post, I complained about another comedic (and idiotic) press release from the TBS publicity department about this very same show, but to no avail obviously since they’re still at it -- which is the usual result for me.

Let the record show that the names of the other cast members of “Angie Tribeca” mentioned in this week’s release were all spelled correctly somehow -- Rashida Jones, Jere Burns, Deon Cole and Andrée Vermeulen -- even though all of these names had the potential to sow confusion. “Jere,” “Deon,” “Vermeulen” -- I just checked them all and they are all correct, even the accent mark in “Andrée” is on the correct “e.”

So if you’re keeping score, out of the six names mentioned in this press release (if you’re counting Steve and Nancy Carell as one name, not two), the TBS publicists got four of them exactly right.

pr, tv
3 comments about "Hey, P.R. People, Could You At Least Spell The Star's Name Right?".
Check to receive email when comments are posted.
Read more comments >
Next story loading