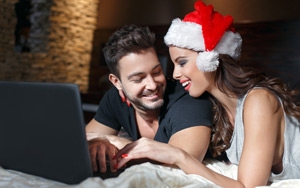 comScore says these mobile transactions are likely to surpass $10 billion in sales for the two-month holiday period. And it predicts that all digital commerce -- typically about 13.1% of discretionary spending -- will rise to 15% in the fourth quarter.

Forrester Research has predicted an 11% gain in online sales for the period. And last month, the National Retail Federation is expecting that between browsing and actually buying, 46.1% of all holiday shopping will be done online -- up from 44.4% last year.

In an online presentation, comScore said that while online desktop spending climbed 8% to $281 billion in quarters one through three, rapidly growing mobile accounted for 16.4% of total e-commerce in the third quarter -- up from 11.1% in the third quarter of last year.

Chairman emeritus Gian Fulgoni said that while offline gains are likely to be weak for both Thanksgiving Day and Black Friday, the online growth rate will be well above average. And he predicts the biggest Cyber Monday in history. “About two-thirds of the growth will be coming from online, which is kind of staggering when you think about it,” he says, “and reinforces the importance of really nailing the online channel.”

In addition, said Andrew Lipsman, VP/marketing and insights, it's likely that there will be between 17 and 18 shopping days, with more than $1 billion in total online sales.

Nor does comScore think much spending will be pulled ahead of Black Friday, despite more aggressive promotions from retailers. “That whole narrative of Black Friday not existing anymore, that’s just not true,” he says. “What gets ignored is that just because promotions are happening earlier doesn’t mean consumers are shifting spending earlier.”

Last year, he says the company tracked below-average growth rates just before Thanksgiving, despite more ales and markdowns in advance of the holiday.

Another important trend is free shipping, with 69% of all online transactions including free shipping, which is a record high, and indicates this is something consumers increasingly expect.