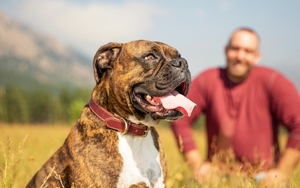 The effort from Leo Burnett has the theme "I Make Dog Chow." It highlights the employees who take pride in going to work every day to make the product.

The first 60-second TV spot features Nick, a Denver-based member of the Dog Chow production team, who discusses his family's close relationship with their dog Khloe. Nick talks about the pride he takes in his job, and the hard work, quality ingredients and attention to detail that goes into making each bag of Dog Chow, which is why he chooses to feed it to Khloe.

The new spot breaks Nov. 28 during CBS' presentation of “The Story of Santa Claus.” It will also air during high-profile network TV specials throughout December, including NBC's “The Wiz Live!” and “The Voice”finale and during CBS's holiday programming.

The campaign, which also includes digital and packaging, uses employee stories to remind pet owners how Dog Chow is made with high-quality ingredients in the USA. The food has been crafted in Purina-owned and operated facilities across the country since 1926.

The emphasis is likely to resonate with pet owners who have faced recent pet food and pet treat scares involving treats made overseas, especially in China. Nestle Purina PetCare is part of Swiss-based Nestle S.A.

Employees also will be featured on packaging rolling out across the product line in 2016. In addition, the brand has plans to launch additional creative, including a Spanish language TV spot, as well as digital and PR campaign support.

"I love that the new campaign allows our employees to share their enthusiasm, pride and trust in Dog Chow," says Shaun Belongie, Dog Chow brand director, in a release. "In my mind, there's no greater endorsement than when the people who are closest to seeing how Dog Chow is made choose to feed it to their own dogs."

"During each spot we get a personal look into who they are, the relationship they share with their dog and the part of America they call home," Pittman says.