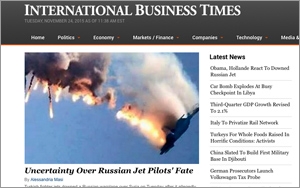 International Business Times announced Monday that John Simons has been appointed to the newly created role of enterprise editor. Roland Jones will take over Simons’ former position as business editor.

Simons and Jones will be based out of IBT Media’s headquarters in New York City and will report directly to global editor in chief, Peter S. Goodman.

The enterprise editor position will see Simons working across all of International Business Times’ sections and focus on creating longer format stories.

He will also oversee one-day projects related to major breaking news, as well as longer pieces that develop over time.

In an announcement on Thursday, Goodman and managing editors Nancy Cooper and Mark Bonner stated: “We need [to] start crystallizing what we used to call the second-day story in the second minute of major breaking news; to conceptualize and execute high-impact and illuminating series on the biggest issues of concern..."

He previously worked at the Associated Press, where he served as the technology and media editor since joining the news service in June 2011. Before that, Simons was an editorial director at Black Enterprise, a staff writer at Fortune, an economic policy reporter at The Wall Street Journal and a senior editor at U.S. News & World Report.

Jones joins IBT Media from Fortune, where he served as senior editor for news. He has also held positions at Time Inc, NBC News Digital, TheStreet.com and Thomson Financial. Originally from the UK, Jones is a Columbia University Knight-Bagehot fellow.

Goodman added that Jones is "will bring a newfound sense of urgency to our business reporting.”
management, newspapers
Next story loading