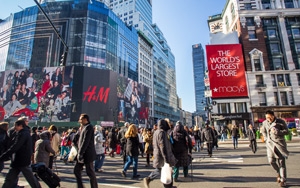 People dove into the Black Friday fray with gusto this year, but mostly from the comfort of their own couches. ComScore reports that e-commerce sales jumped 9% on Thanksgiving Day to reach $1.1. billion and 10% on Black Friday to $1.7 billion.

And the National Retail Federation says that more than 151 million people shopped this weekend, either in a physical store or online -- a big jump from the 136 million who said they planned to shop in a survey a few weeks ago. But in-store spending fell on Black Friday --  from $11.6 billion last year to $10.4 billion in 2015 -- and sales on Thanksgiving dropped from more than $2 billion to $1.8 billion, reports Time, citing data from Shopper Trak.

“It’s clear that consumers are spending,” says Jackie Fernandez, a retail partner at Deloitte. “But everything started so early — as much as a week ahead — that there is no reason to go into stores the day after Thanksgiving when you can get such great deals online.” She spent the weekend in malls watching traffic, and says there were “plenty of lulls, and people tended to be very targeted in the deals they were seeking.”

For the big picture, it doesn't matter much. “From a macro point of view, a sale is a sale, whether it happens online on Thursday or in-store on Saturday,” says Ramesh Swamy, EVP of Curacao, a Southwestern big-box retailer that caters to the Hispanic community. “But for individual retailers looking to maintain or improve their market share, it’s important. When and where do they need to offer their best deals in order to win shoppers?”

The NRF says 102 million people shopped in stores over the weekend, while 103 million shopped online. A change in its survey format means the Washington, D.C.-based trade information can’t ascertain whether those numbers are up or down from last year, or whether spending has increased.

It says about 74 million shopped in stores on Friday, and 35 million on Thanksgiving Day.

While that’s nothing to sneeze at, Fernandez tells Marketing Daily that the shift to more online deal-hunting is likely to cause retailers to rethink their Thanksgiving Day opening strategies next year. “It’s very expensive to open, both in terms of labor and utilities. And there’s been a little backlash from consumers. The question for retailers is how loyal their shoppers are. Will Thanksgiving Day shoppers spend their money somewhere else if their favorite store isn’t open?”

Still, the prevailing sense is that consumers are in the mood to spend, and impressed by the big markdowns they’re already finding. “Consumer fundamentals are very, very strong,” said NRF President and CEO Matthew Shay, in a conference call presenting the weekend totals. “Consumer confidence is in a good place to get us to a strong holiday season. We’ve seen that in the last few days, and in a big way.”

And while good deals are doubtless part of the reason more people shopped than expected, the NRF also detects a strong scent of cat-and-mouse thinking, with 43% saying they think retailers’ promotions going forward will be better than the deals offered over Thanksgiving weekend.