Seven Episodes Into Season Two, 'Fargo' Is TV Storytelling At Its Best 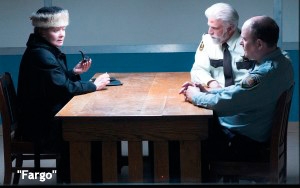 We are now seven episodes into the second season of “Fargo,” and my initial reaction to the show when the season started Oct. 12 remains the same: This is the best show of the year.

It comes down to storytelling -- a word you’re probably tired of hearing by now. It is so overused that it has become a cliché -- the go-to word that every writer and producer of TV shows in Hollywood applies loftily to their own work in interviews and panel discussions. It’s intended to elevate their work to literary heights, but as most of us well know, the vast majority of TV shows do not rise to that level.

“Fargo” does, though. This season, watching this show has been like reading a page-turning, hard-boiled novel. “Fargo,” seen Monday nights at 10 Eastern on FX, provides an illustration of why some storytelling is better than others. The secret seems to be that it’s not just the story itself that makes a great book a page-turner, or makes a TV show like “Fargo” so engrossing to watch week after week.

The story on this season’s edition of “Fargo” is ample enough for a 10-episode series. “Fargo,” like “American Horror Story” on FX, tells its stories from start to finish in each 10-episode season. This season’s “Fargo” involves a sprawling rural crime family named Gerhardt based in Minnesota whose operations are targeted for a hostile takeover by a criminal outfit based in Kansas City, Mo. The war plays itself out in the snowy farmlands and small towns of rural Minnesota and also North Dakota.

A third faction in the conflict is law enforcement, represented by a Minnesota state trooper (played by Patrick Wilson) and his father-in-law, the sheriff of Luverne, Minn. (played by Ted Danson).

And you might say there’s a fourth party too -- a young butcher and his wife (Jesse Plemons and Kirsten Dunst). In this season’s first episode, she accidentally killed one of the members of the crime family with her car on a lonely highway where there were no witnesses. Her husband the butcher dismembered the corpse and they disposed of it. Now they’re being sought by the crime family and law enforcement.

Aiding in the storytelling -- and as crucial a part of the story as the plot -- are this show’s settings in the frigid wilds of the northern Middle West. The year is 1979, and the show’s polyester outfits, gas-guzzling American-made cars and jangling tabletop telephones made of heavy plastic persuade you without a doubt that you’ve taken a TV trip back to the 1970s.

The best feature of “Fargo” is the way it surprises you. Characters you never expect to die are summarily disposed of -- such as the buttoned-down mobster from Kansas City played by Brad Garrett. He was unexpectedly killed off-camera in an early episode and his head delivered to his mob henchmen in a large hatbox. Also killed, just this week: Simone Gerhardt, granddaughter of the family matriarch, shot by her own uncle for betraying the family. Or was she? Her execution was not shown, so who knows?

In a show full of great performances, Jean Smart is a standout as the aforementioned matriarch, a woman whose name is Floyd. In this week’s episode, when she announced her intention to smoke in a police interrogation room (the scene pictured above), she smoked a pipe. She’s the toughest crime matriarch since Shelley Winters played Ma Barker in “Bloody Mama.”

What’s wrong with this year’s “Fargo”? That there are only 10 episodes (although it should be noted that this week’s episode ran for nearly 90 minutes, including commercials). That means “Fargo” is almost done, seemingly in the blink of an eye. The season finale airs Dec. 14.

There was good news this week, however: FX announced there will be a Season Three next year.

tv
5 comments about "Seven Episodes Into Season Two, 'Fargo' Is TV Storytelling At Its Best".
Check to receive email when comments are posted.
Read more comments >
Next story loading