'Dancing With The Stars' And The Triumph Of Uplifting TV 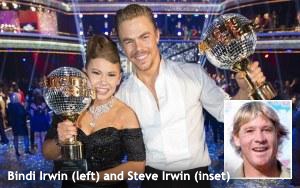 Bindi Irwin won the mirror-ball trophy on “Dancing With the Stars” Tuesday night and there wasn’t a dry eye in the house.

The plucky 17 year-old was not only the best dancer of the three contestants who remained in the finale, but she had the best back-story too. The combination made her a shoe-in.

She is the daughter of Steve Irwin -- the famed and for many people, beloved Australian TV personality known as “the crocodile hunter” who died while filming one of his nature shows. Irwin was just 44 when an agitated stingray he encountered in shallow water while snorkeling in Australia’s Batt Reef fatally stung him. It was September 2006, and Bindi was 8. She eventually followed him into the TV industry by becoming a star of nature shows aimed at kids.

On the two-hour “Dancing” finale seen on ABC Tuesday night, a large photo of Bindi’s father, who seemed to be smiling down on her, appeared on a large screen and the point was made. Her eventual victory was thus assured (barring any unforeseen mishap) in this, the 21st go-round for “Dancing With the Stars.”

And so, another “DWTS” has come and gone. And once again, the finale was spectacular. You can complain all you want about everything that you think is wrong about a show like this. But when I make a running inventory in my head of all the gripes you could have about this show, it occurs to me that all of these very same elements are what makes this show so great in the first place.

At two hours, this finale is always too long and filled with a ton of filler material -- clip retrospectives from the season’s previous episodes, “guest” appearances by past contestants and various music stars, dance numbers performed by the show’s dance pros and, of course, tons of commercials.

However, all of these things make “Dancing With the Stars” what it is, which is: An all-American TV show. Watching Tuesday night’s finale was like laying eyes on the Las Vegas strip for the first time. It is meant to dazzle you and it works. Plus, the performances on “DWTS” are top-notch and you can see them for free. What’s not to love?

And what about these over-the-top judges? They gush outlandishly over every performance as if these contestants are Ginger Rogers and Fred Astaire -- bestowing perfect “10s” all over the place. But you know something? So what. Their positivity is one of this show’s greatest strengths. When the judges leap from their chairs with exuberance over a dance performance, you know you’re seeing something rare on TV, if not in America -- people actually engaged in physical activity.

Their positivity as they shower these amateur dancers with praise and encourage them to do more, move more and improve more, is a stark contrast to all the violence, off-color (and often gross) comedy and downright laziness that is TV’s usual stock-in-trade.

I know it’s a cliché to always use the Kardashians as the metaphor for what’s wrong with television (if not society), but they’re so famous that they inevitably become the poster children for columns and blog posts like these.

In the context of this blog post, one of the things that has long struck me about “Keeping Up with the Kardashians” -- and other such reality shows -- is that, in reality, very little actually happens on a typical episode. When I encounter the show, the family members are usually sitting around a living room talking, or sitting around a table talking, or sitting, well, somewhere talking -- in a café, in a car, in a salon. It’s endless talking (and usually complaining), and very little action.

“Dancing With the Stars” is the direct opposite, a TV show that demands that its participants quick-step out of their comfort zones, work hard and break a sweat. And if that’s not unique on television today, I don’t know what is.